Where can I see the Pink Five series?

Over the years, episodes of the Pink Five saga appeared on StarWars.com, iFilm, Atom Film, YouTube, and Vimeo.
Now the complete 60-minute Saga is available to stream on Amazon Video!
(Also available at Amazon.co.uk, Amazon.de, and Amazon.co.jp.)

I don't want to stream the Saga, I want to own it!

You got it! We have a limited number of promotional DVD's left over from our Kickstarter project. The DVD's have the entire Saga, plus loads of special features - commentaries, outtakes, making-of documentaries, and more. 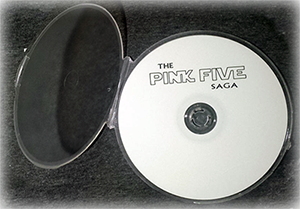 If you'd like to be a retroactive backer just use the form below and we'll get a DVD in the mail to you right away (price includes shipping and handling).
Don't have Paypal? When asked to log in, select "Pay by debit or credit card".

Are you affiliated with Lucasfilm?

No, but Lucasfilm has supported us by showcasing our series at their conventions, featuring us on Starwars.com, putting Stacey on an official trading card and even giving her a cameo in an Extended Universe novel.

However, the Pink Five Saga was entirely paid for out of our own pockets - plus donations from fans, which we appreciate tremendously.

How many shots in the Pink Five videos are from the Star Wars movies?

None. Obviously we're trying to make our stuff look like original Star Wars footage, but all the shots are our own re-creations.

What software did you use?

Was the first episode really mixed at Skywalker Sound?

Yes, it really was. That was our prize for winning the Star Wars Fan Film Grand Prize that year - we got to take our audio tracks to Skywalker for a professional remix . It was an amazing experience.

Will there be any more Pink Five episodes?

Studios should hire you to make movies or tv shows or internet stuff for them.

That's not a question. But you're right, they really should.

I have a question that you didn't cover.